The February 14 election was a clear victory for the supporters of Catalan independence (pro-independence parties together won 51.14% of the vote including the votes for parties that failed to win seats in parliament), although the low turnout also raised concerns about a general unease among the voting public. The result now forces the political parties to refine their strategies and find allies to form a new government.

The political parties quickly jumped into the fray and began trying to shape the future executive. Conversations have continued since, but it is still impossible to predict the final outcome. In the coming weeks, it will become clearer whether agreement to swear in a new president is possible, or whether a new election will take place. We asked professionals and figures in Catalan civil society what they think the priorities of the future executive should be. The opinions on the following pages are from people in a wide range of fields, from culture and health to migration and the media.

The big questions are which government can best address the concerns of civil society? Which candidate is best placed to get the 68 votes required to be sworn in as president? The independence bloc achieved more than ever before, with ERC gaining 33 seats, Junts 32, and CUP 9. Between them they have a majority of 74 seats, but they still need to come to an understanding if they want to form any type of pro-independence government.

In such a scenario, ERC’s main candidate, Pere Aragonès, will most likely become Catalonia’s next president. Yet, the Republicans also insist on a broad front that includes the leftwing En Comú Podem, something that does not sit well with centre-right Junts. Some in CUP, ERC and En Comú Podem dream of seeing a pact of these three leftwing forces, but it is the numbers that count. For such a thing to happen, it would need the support of Junts or the PSC Catalan Socialists, who are against independence. What’s more, parliamentary mathematics means that one of these parties abstaining in the vote for president will not be enough for it to happen should the other groups vote against.

That means all eyes are on the CUP party, which once again finds itself in the position of kingmaker. The far-left pro-independence party has increased its number of seats from four to nine, but it waits to be seen what conditions it will demand for its votes in the chamber to be used to form another pro-independence coalition government. The process of reaching agreement will not be easy or smooth.

Meanwhile, PSC, the election’s overall winner, says it will pursue the miracle of Salvador Illa claiming the presidency, although the party’s opposition to independence makes the likelihood of it attracting enough support in the chamber almost impossible. For the moment, the most likely scenario is that ERC and Junts can persuade CUP to facilitate the swearing in of a new pro-independence president.

If no agreement is reached before May 26, the parliament will be dissolved and Catalonia will return to the polls. Whatever happens, the February 14 election will be remembered for taking place during a pandemic, the independence bloc attracting record support, PSC’s recovery, the emergence of far-right party Vox, and the collapse of Cs, the winner in 2017. 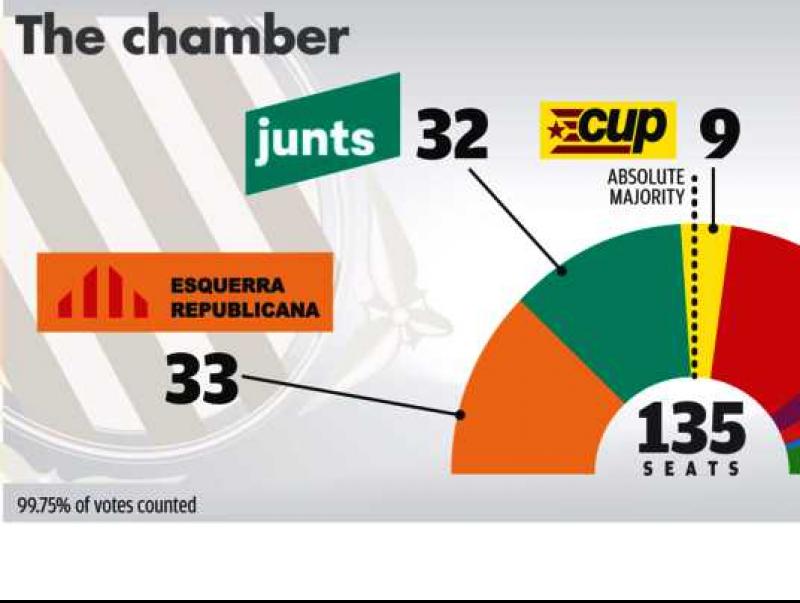