Jimmy Jump, a late recruit to the International Brigades, set out from London in November 1937. This meant that the action he saw, after machine-gun training in Albacete, was in Catalonia – principally, the Battle of the Ebro that was fought from June to November 1938. He was evacuated with jaundice in September and spent nearly three months in hospital in Santa Coloma de Farners.

Unlike many conventional Civil War memoirists who follow every twist in the Communist Party line, Jump wrote what he saw, including negative aspects of the Brigades. This was assisted by his being a journalist and not previously being a party member – though he joined during his stay in Spain.

There is a debate at the heart of this book, which explains why it was not published in the 1960s when Jump wrote much of it, nor in the 1980s when he revised and extended it. Only now has his son brought the manuscript to light. In his preface Paul Preston speculates that Jump was probably aware that his openness in discussing three taboo subjects, i.e. executions of volunteers, false accusations of “Trotskyism”, and homosexuality, would have caused hurt to his comrades in the British International Brigade Association (IBA). This is surely true, as Stalinist orthodoxy was the order of the day in the IBA. Non-publication avoided this hurt – and the ostracism by valued comrades that his comments would have caused.

On the way to a counter-attack at Balaguer in May 1938, the 15th Brigade is assembled in a field at Terrassa. As Jimmy Jump, unlike most volunteers, spoke good Spanish, he was often assigned to translate. He and a senior Spanish officer stand on a low stone wall and he translates a chilling speech. “Two Trotskyist deserters” from the Brigades have been shot… “found guilty of deserting in the face of the enemy and of spreading defeatism.” That night everyone in camp is struggling to understand the executions. Jump wrote:

I wondered how many, in their hearts, felt as I did. Despite all that we had been told of defeatism, Trotskyism and fifth-columnists, I felt that these two men had really been executed merely because they were afraid and I wondered how afraid I would be when under fierce attack. (p.103)

The book reaches its narrative climax at the Battle of the Ebro, when the Brigade is pinned by enemy aviation to the side of the bare Hill 481. The sun tortures the soldiers while from the hell of no man’s land the dying’s “pleas for help are brought to us on the warm air” (p.129).

Jump entwines another climax with this battlefield horror. While his comrades are dying around him in the battle for the hill, he hears that his comrade Paddy O’Sullivan had shot an 18-year-old Spanish deserter. Jump realises he could never have done this. He thinks that he is “only intellectually an anti-fascist”, while the men around him “who had suffered poverty and unemployment” understood that fascism was the extension of the capitalism that oppressed them and were prepared to do anything at all to halt it. I am not convinced by Jump’s argument that intellectuals are soft and that only real workers are sufficiently ruthless, but the point is sincerely felt and strongly argued.

Worse was to follow, when his friend Maurice Ryan who “had an irrepressible sense of humour and revered no one” was shot as a “Trotskyist – a label so easily fastened on anyone who deviated from the ’correct’ political line” (p.133). Ryan’s only crime was that he was a rough guy who liked to crack jokes against authority, including the Communist Party and the IRA. Jimmy Jump remarks that Ryan was “a brave soldier and a fine machine-gunner”, but fatally he said what he thought. You might think these were qualities to be nurtured and admired in an anti-fascist: free debate and hatred for authority and fascists. Clearly not the case when opinions and jokes contradicted the party line.

Other themes usually absent in Civil War memoirs are tackled by Jump. He criticises the puritanical attitude of the Brigades’ political commissars to homosexuality; and comments how soldiers were “generally bored to tears” (p.116) by the lengthy political speeches of the many visiting dignitaries. They liked Communist Party General Secretary Harry Pollitt, though, who was clever enough to make no rousing speech, but told them the football and cricket results.

Twenty of Jimmy Jump’s short, thoughtful poems are intercalated through the text. They deal with the basics of life in the war, like this on the fear before battle:

All my belongings have gone in a lorry

To the safety of the rear

And I am alone

Wearing my tattered uniform and my fear. (p.119)

Jimmy Jump need not have feared his fear, for he was commended for courage under fire. His poems are direct, not pedantic or pompous. They are lyrical in the detail, for example: a loaf of bread, a tin of corned-beef, a change of socks, the “hospitals without eggs/ where nurses wash sheets without soap” (p.155).

All those who volunteered for the International Brigades in the Spanish Civil War of 1936-39 deserve maximum respect. They put their lives on the line to fight fascism. Jimmy Jump’s outstanding book describes brilliantly the personalities of his comrades and the country they fought in. He also raises two key debates, about fear and desertion and about the Stalinist witch-hunt against “Trotskyism”, which make the book particularly powerful. 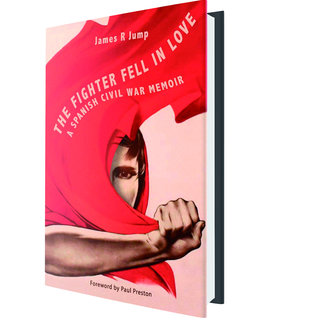 The Fighter Fell in Love. A Spanish Civil War Memoir Author: James R Jump Foreword: Paul Preston Preface: Jack Jones Publisher: The Clapton Press (2021) “What shines through this self-deprecating, painfully honest and brutally realistic memoir is a writer with a poet’s eye for detail, a gentle sense of humour and, above all, the intelligence of a thoroughly decent man.” Paul Preston

James R. Jump is exceptional among volunteers in that he spoke Spanish before going to Spain and his time in the Brigades led to a profound lifelong love of Spain. The Civil War was not just a sentimental memory.

Born in Wallasey in 1916, he learnt Spanish at school. He then found a job as a journalist on the Worthing Herald. He helped out with Basque refugee children in Worthing and Lancing, where he met Cayetana Lozano, who had accompanied the children in their exile. Engaged before he left for Spain, they married in 1940.

In a fine afterword his son (also James Jump) summarises his father’s life after the Civil War. Jimmy Jump taught in a secondary school in Rochester, Kent, where his internationalism found an outlet in promoting Esperanto; then at Medway College of Technology. On Franco’s death in 1975, he and Cayetana went to live in Logroño. However, health problems forced him to return to England after a few years: to Westcliff-on-Sea, Essex, where he lived until his death in November 1990.

James R. Jump wrote many articles and a number of books on Spain, including several school text-books. His first book, The Spaniard and his Language, dates from 1951; his last in life was the 1,168-page Penguin Spanish Dictionary (1990). A number of his poems appeared in magazines in the 1980s. In 2007, Piedra de Rayo (Logroño) published a bilingual Poems of War and Peace.